Rabi topped off Firestone Walker Brewing Co.'s exterior with a brand new and brightly bold mural, upgrading the establishment's spray painted lion and bear for a mightier pair and text that reads “Beer Before Glory”. You can cruise past this colorful sight on Washtington Blvd. and Carter Ave. in Marina del Ray, California, or stop in for one of Firestone's delicious drinks.

Firestone interviewed Rabi on the project:

What is the appeal of creating art in public spaces and is the approach different than working on a canvas?

Absolutely. I found that creating work in the studio on canvas, more like personal work, is just that it's very personal. You don't have to worry about the public's reaction daily from the very start. If there's an end result that might look completely different, than where it is in the beginning that might offend someone or might scare someone or might create immediate judgment, you don't have to worry about that. In the public, you must be prepared for the public's reaction day one and that's a huge part of painting in public spaces. So, I think that's the biggest difference. You can be very personal when you're in the studio. You have no choice but to be public in public.

How did the different aspects of this project serve as an inspiration for your design? Whether that be the Firestone Walker brand, the location, and the community.

Oh my God. Well, entirely. There was a style that Firestone Walker guys were drawn to for me, but conceptually, they had an idea, and their story was what I was trying to communicate. So, there is a clear narrative that is the Firestone Walker story. It's the relationship between the lion and the bear. Beer before glory, the tagline as well, but interpreted in my style, my look and it became a great balance between the two of us. I think it turned out well.

Would you say that fits with the Firestone Walker location in Venice and the community?

Oh yeah. You have a traditional sort of statuesque lion and bear, which gives it more of a timeless solidified stone, that feeling of traditional sculpture and then you have some bright, progressive wild color which is Venice: popping, wild, fun. Then you have the gold lettering, which gives it sort of an in between, like a gold flake or there's a timeless aspect to that but there's also a modern aspect, which is the marriage of typography and figurative imagery. There's a beautiful balance that feels like something more modern.

How does photography, color and other artistic elements play a part in your creative process?

Before anything I do, I like to deep dive and do R and D, right? Research and development. I go in and I find references and imagery that in the end help create the final product. It's like ingredients for beer. You find the best ingredients and it creates the best taste and that's exact what we did. I went and scoured examples of lions and bears and found the perfect sort of dynamic duo of those two creatures and then same with the colors. And even the colors they look like they're more organic, but they're truly referenced.

Those colors, that palette, came from weird abstract painted references that I found online or through the library, through imagery I've had forever. I'm big on reappropriation and that's what this mural is. It's like the epitome of reappropriation in a way that doesn't feel like you've seen it before. I think Rauschenberg is a good example of collage reappropriation, but it feels so him and I think that's what this was.

I think it's fitting to what you guys do here in Venice, because this is the R&D site of Firestone Walker, where recipe development comes together. You trial all these concoctions and then send it up to our main headquarters in Paso Robles to brew the next Firestone Walker release. The fact that I’ve gone through a similar process to trial and test all those things and put it all together and you release it out to public is really cool.

What do you hope will resonate with people about the mural?

I guess I would say first that I have no control over what people think of it. In the public, you have to be prepared for people to love or hate or both, which is usually the case. But what I hope the wall can act as is like an olive branch to people who don't know anything about Firestone Walker, but then see the mural and see that they're doing something creative and connecting with people in a different way. It's bridging a gap to create some sort of influence and hopefully an invitation for the community. It's like, "Hey, we're here. We've been here and if you don't know about us, this is what we're about."

To me the mural says that we're about creativity and community. The vibe I got from everyone here in Venice and people that run this brewery, it's the least corporate of a corporation. You know what I mean? You guys are good people. It makes sense that you would put something beautiful like this mural outside.

What similarities do you see in the craft beer world in the art world?

On top of what I said before about the creative process, I'm imagining that there are similar people doing what you're doing as well, right? There are companies or groups of people trying to find the epic taste of new flavor and they're all out there because they want to be, it's their passion to make fucking good tasting beer, different beer, original beer.

It's the same thing with artists. We want to make the best fucking art, original art. Coolest art.
And we're all in a similar situation, we all know each other. There's a community. Someone makes something that we know tastes really good using, we go, "Fuck. Did you try that guys... Holy shit. How did he do that?" And then we all can understand and respect how he did it.
We’re doing it too. And so when you see someone stand out, you're like, "Holy shit." You can really appreciate how they got there or how they landed, and you see the nuances to what they did.

So I think that's fun - the community, the camaraderie that probably exists within the beer making world exists within the art muralism community. And I would say muralism, in particular, of all the art styles because when you see an artist paint a mural a certain size or on a certain type of building, or they had to use a certain type of lift or the terrain, we all get that. We go, "Fuck I've been there." Nobody understands what it takes to make a mural. Other than the muralist. I mean, you stand by and you go, "Oh my gosh." And then you don't even actually realize how physical this fucking job is. I mean, I'm wearing a fucking back brace a couple of the days because I'm dying up there. So there's so much more that comes into play than a studio painter-Or an artist. It's like an Olympic sport. It's not an old man's game. You know what I mean? So yeah. I see myself painting murals until I can't and then we'll see what happens.


Is there this regionality within muralists that you're proud to be from LA or that you’re part of the local area?

For sure. I think having painted all over the world and meeting artists that are from different parts of the world, doing the same thing, muralists that travel and paint, you really get to see what it's like leaving your home and the respect that you get, and the perspective you get when you return home. It's a taste of something new.

That’s why I'm really impressed by people who are respected from where they're from. It's almost like rapping. When a rapper is really respected from their hood, you know that motherfucker's got love. You know what I mean? So, I think that's something I cherish - that I'm respected in Los Angeles and known as, not only an artist who travels, but an artist who has big murals in LA and this is a good one to have under my belt too.

So in turn I think that's cool for a Californian brewery like Firestone Walker to be collaborating with local artists from their own backyard. People know the Firestone name all over the world but there’s always a deeper connection with your local roots. Which is crazy because I lived in Santa Barbara. I went up north to SLO all the time. I have always been a part of that culture. This coastal, California culture. I'm recognized from Northern to Southern California, and all over the world, but really this is my home and people know that. I've known of Firestone beer for a long time. I drink Firestone beer. 805, my area code's 805. It really is. So, it couldn't have been a better collaboration. 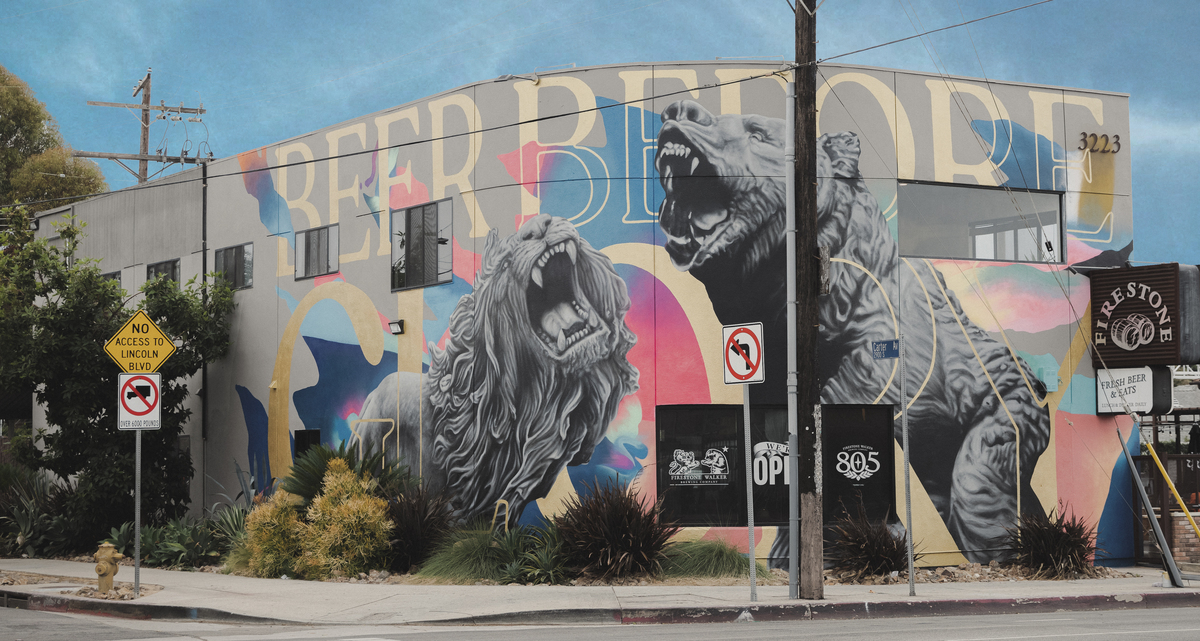 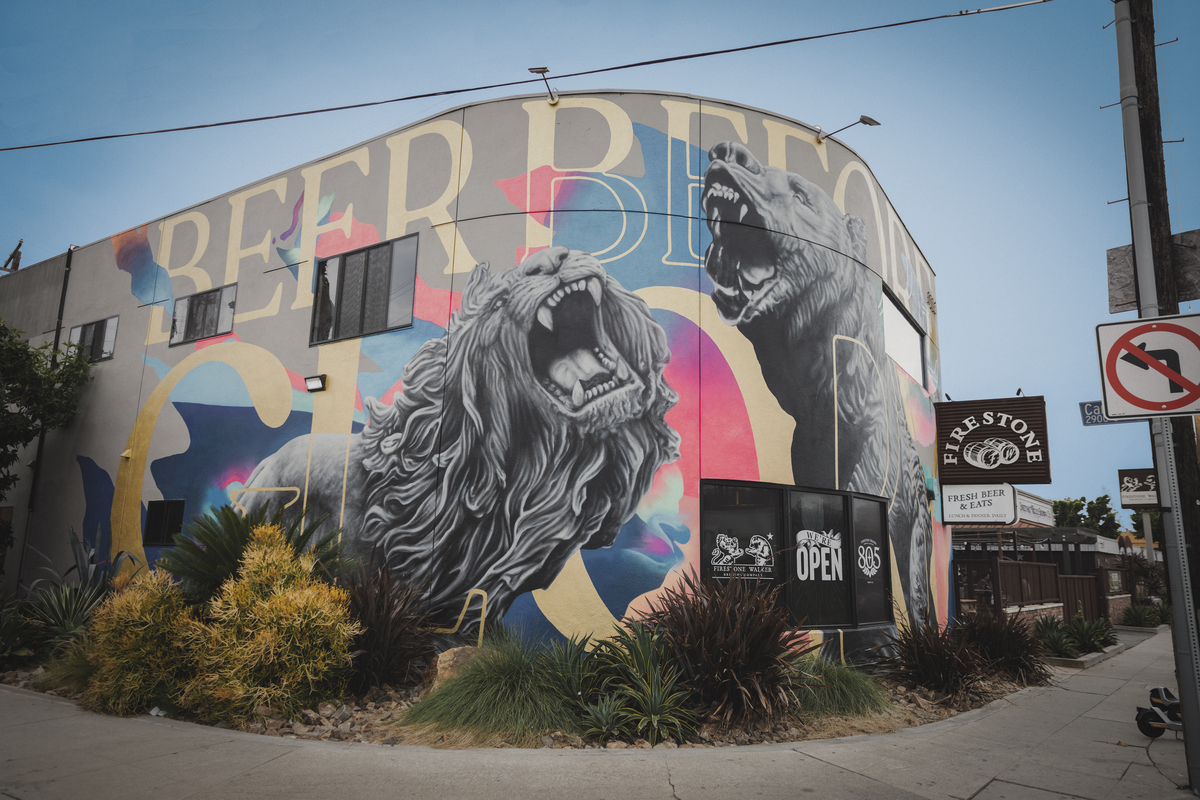 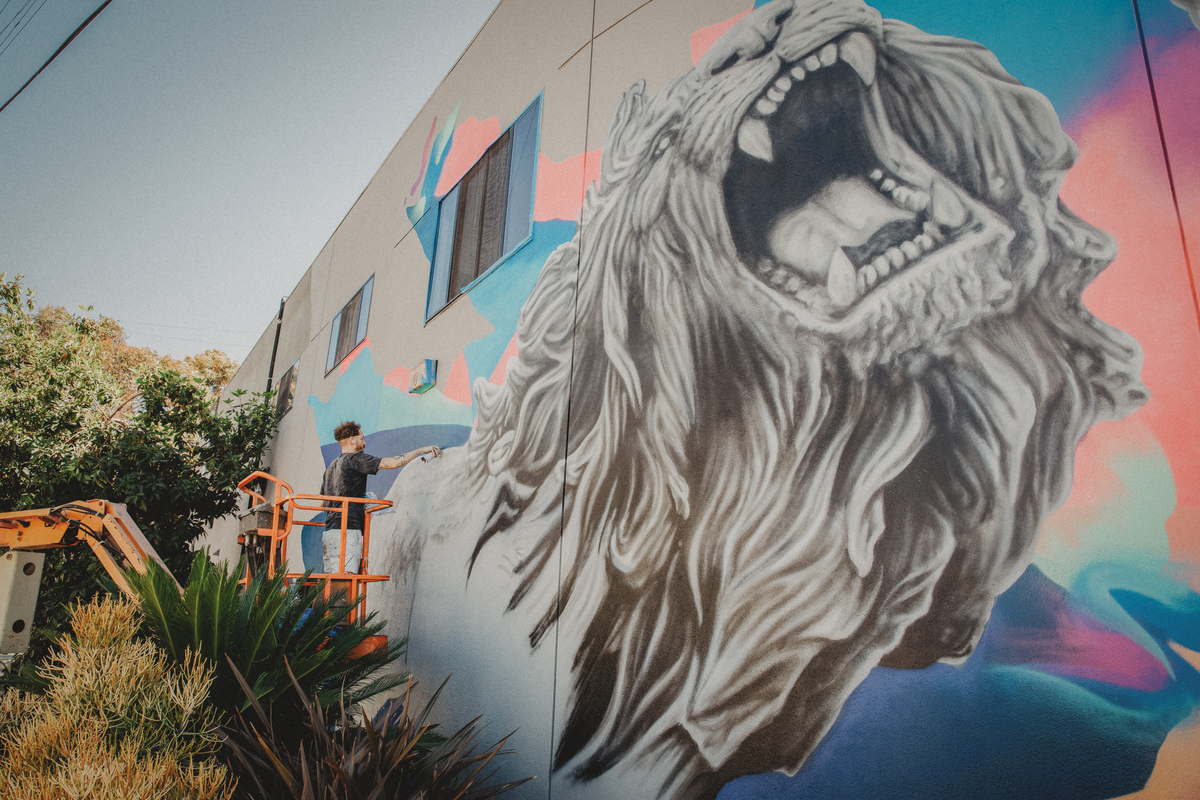 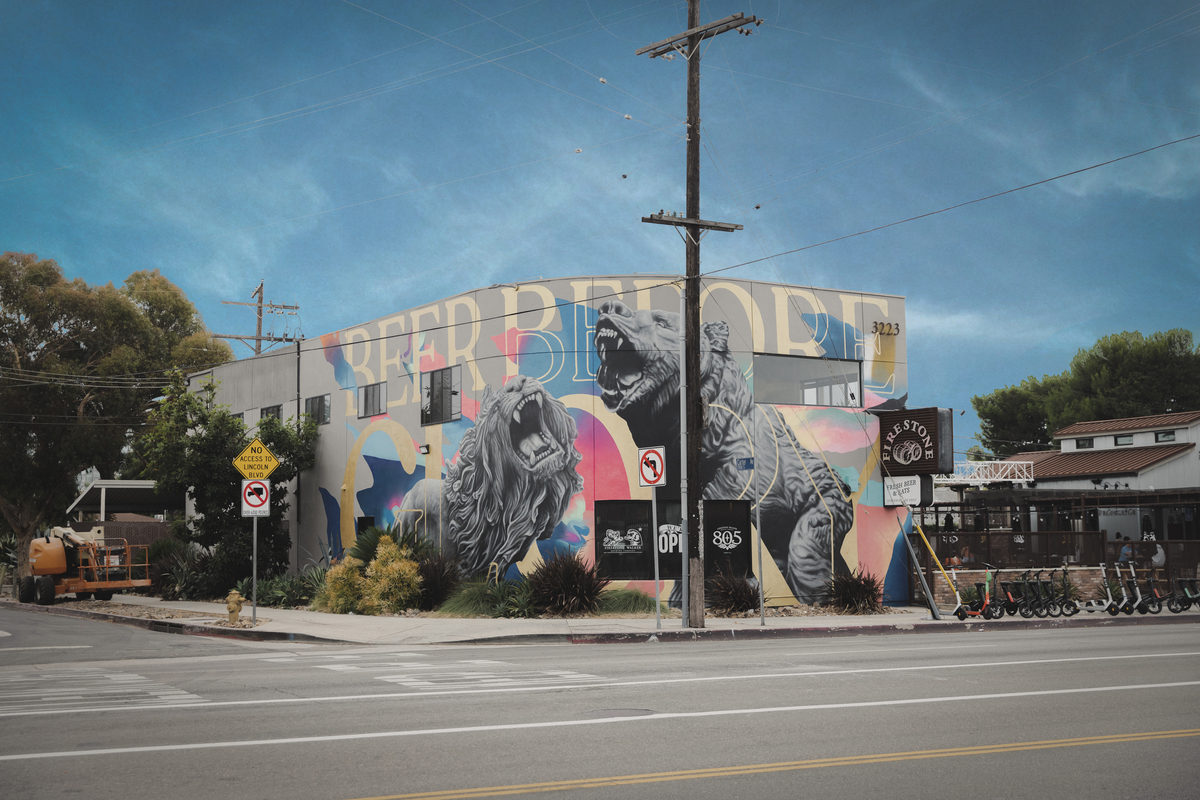 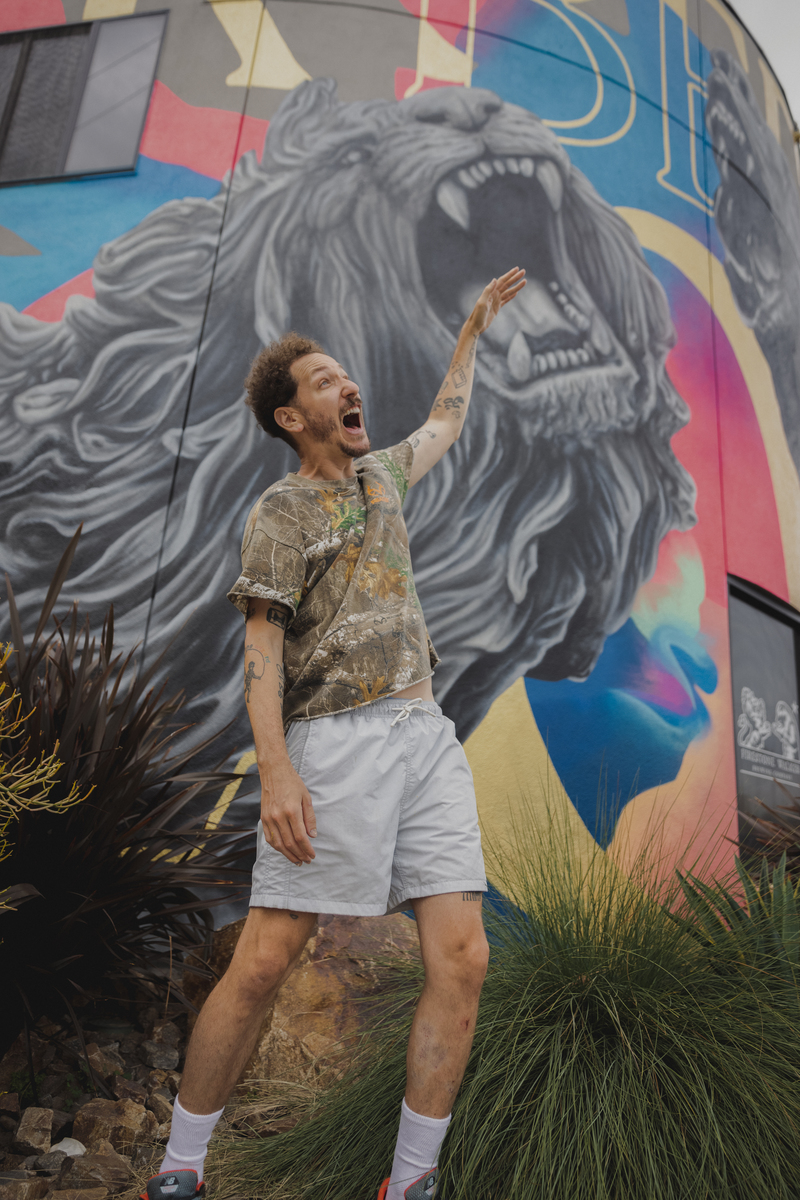 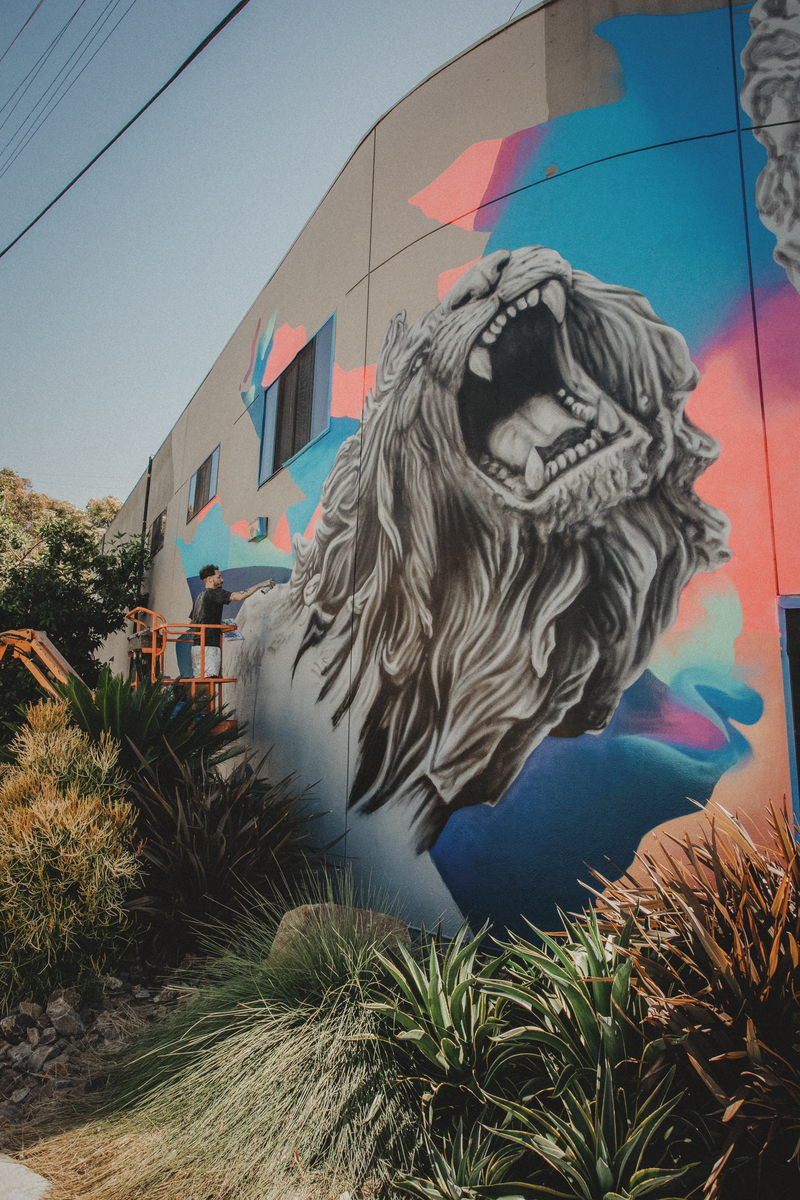 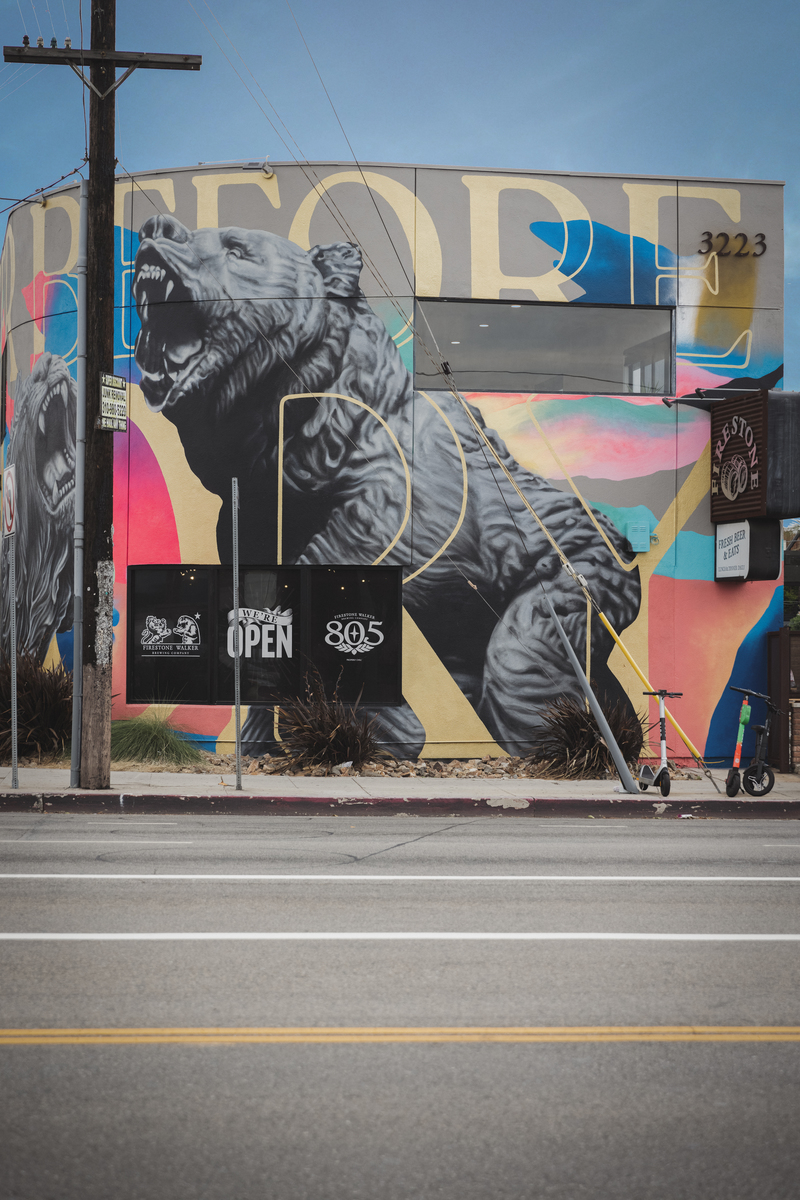